How to build an Influencer Marketing strategy for 2019

In 2019, Influencer Marketing (on Instagram alone) is expected to grow from a $1,6 billion industry in 2018 to $2,38 billion in 2019 (Statista.com). A survey from influencermarketinghub.com also claims Influencer Marketing to be the fastest-growing online customer-acquisition method, saying around 70% of marketers will increase their Influencer budgets for the upcoming year.

A lot of marketers wonder how they can go from sponsoring a couple of blog posts here and there – to building a long term, strategic plan with Influencers as a solid part of the market mix. In this article, we will introduce you to four different strategies to keep in mind when building the market plan for 2019:

– The bling on top

– Influencer Marketing as the core of the market plan

This strategy is about having a marketing strategy with ads running parallel with-, before- or after an Influencer campaign. You are using the power of influence to reach specific goals for converting, or as the extra bling to get a stronger footprint within the target group.

The Influencer’s aspiration- and association value contributes to raise the emotional impact of your plan. It will also enforce the branding, increase the effect and add extra value to the overall results.

Audio book app, Storytel, had a broad marketing strategy with several different advertisements and campaigns that ran parallel with Influencer Marketing. Our Influencers Caroline Berg Eriksen and Sophie Elise were identified as the perfect match for their goals and got the mission to increase the total value of the customer’s strategy.

This resulted in a collaboration over three years between Storytel and United Influencers. Using Influencers targeting several segments. The Influencers promoted Storytel in their own channels, such as blog, Instagram and Facebook. They spread authentic and trustworthy stories about how Storytel are a part of their everyday life. The case we did with Sophie Elise, converted around 15% of the brand’s app downloads in total, over 5.000 new users coming directly from the Influencers’ followers. This was measured via the use of discount codes and tracking where the traffic on Storytel’s site came from. This case was particularly authentic since it was Sophie Elise’s own book, read by her, promoted to her audience and followers. 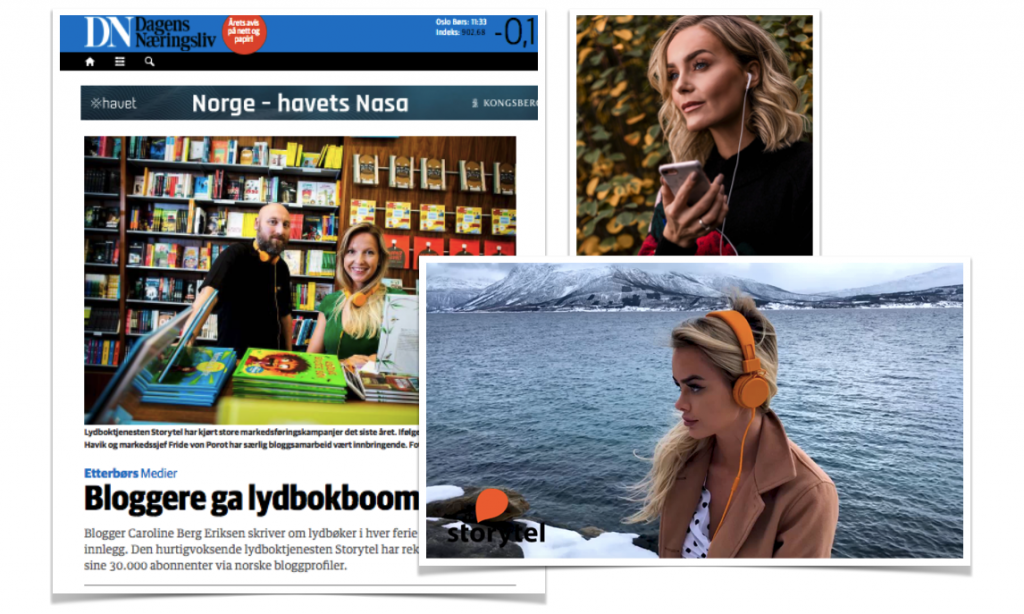 2. Influencer Marketing as the core of the market plan

This Influencer Marketing strategy is based on using Influencers as the base of all other marketing activities. The Influencer creates authentic content and often designs actual products that is used in both the brand’s own communication and the Influencer’s channels. It can be for example a designer collaboration or an ambassadorship.

There is no limit to what you can do together with an Influencer with this strategy. For example; have them post ads in own channels, use them as models for your products, give them the opportunity to design a product and/or make a strong video to use in all media channels.

The point of using Influencer Marketing as the core of the market plan is that you can build everything around their strong personal brand and the aspiration value they have to their audience. Brand and Influencer melts together and creates genuine and trustworthy content supported by the Influencer’s personal brand value. 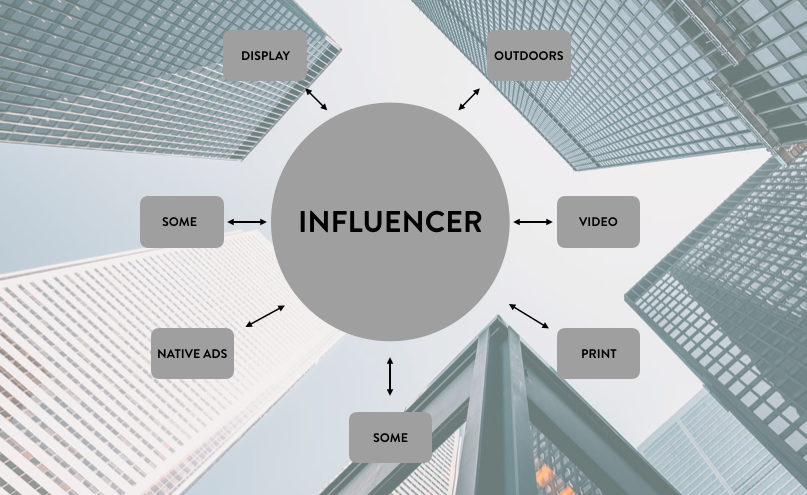 An example with Ellos, where one of our campaigns had an Influencer as the core of the plan

Lifestyle and clothing brand Ellos wanted to use Influencers as the core of an entire clothing line and hired our Influencer Sofi Fahrman. She contributed to develop the product from scratch, designed the clothes, promoted the line in her own channels, was used as a model to show the clothes on Ellos’ channels and was the cornerstone of the whole line. The content created with Sofi was used in all advertisements for the line in different formats and visual expressions.

The end result was a beautiful clothing line for mother and daughter shot in one of the Influencer’s favorite places, Ibiza. Ellos reported that their web shop noticed 40% more traffic than usual on the launch day and 50% of the line were sold out on day one. 3.000 items were sold in only three hours. In total, Ellos increased their revenue with 50%. 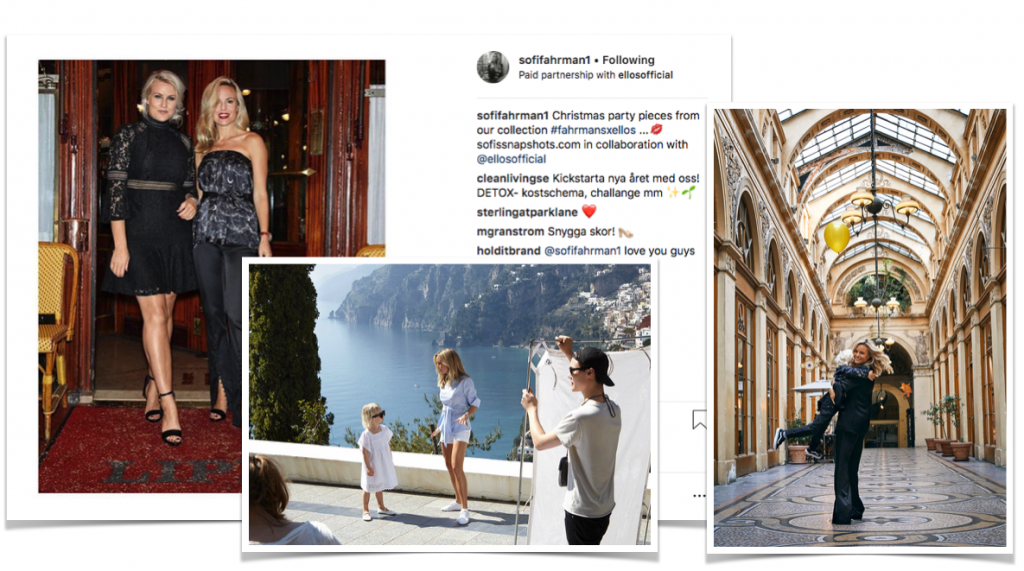 This is often Influencer campaigns with smaller budgets, without the brand running other campaigns. It can be a creative activity leading to a strong short term effect. For example an event, a creative stunt or a contest to drive engagement. It ties an Influencer’s power within a target group together with an activity that complies with an advertiser’s goal for quick response. 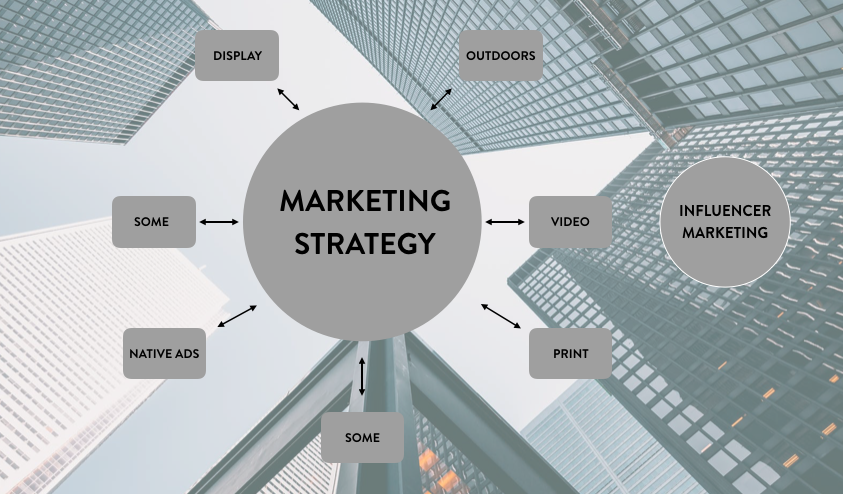 That time Influencer Komikerfrue dressed up as a giant o.b. panty liner

Tampon company o.b. wanted to launch a new product, panty liners, to the Norwegian market. They wanted to reach a lot of people to spread the word and establish familiarity in the target group. Our Influencer Komikerfrue was given the task. This resulted in a creative stunt, where she dressed up as a giant panty liner and walked down Oslo’s main street to hand out product samples. A camera team followed her day and created an engaging video to be shared on social media. On Facebook, it reached 320.000 people, got 120k video views and over 2.000 engagements. On Instagram over 12.000 people engaged with the content. 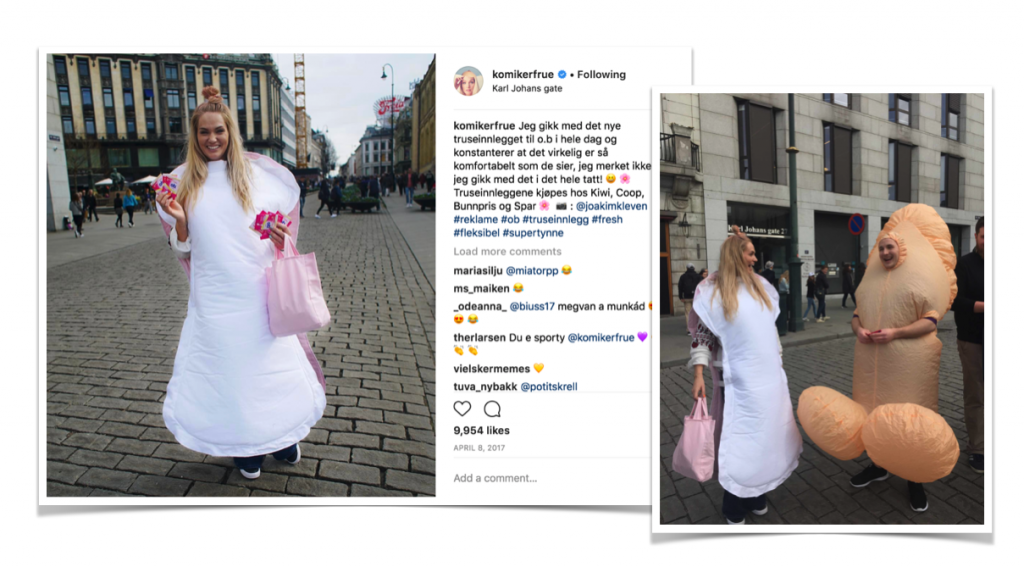 When creating a long term concept, we focus on making an Influencer driven campaign where Influencer Marketing release the snowball effect. Read more about using Influencers to build your brand in this article. 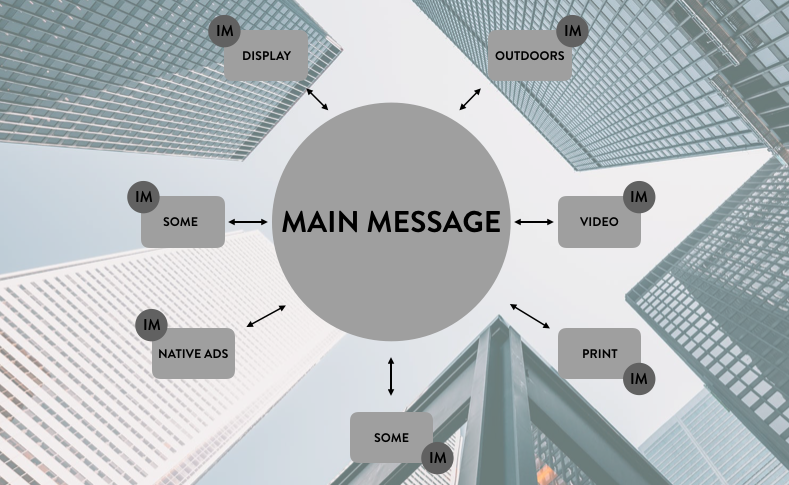 The official fruit and vegetables office “Opplysningskontoret for frukt og grønt” wanted to create a campaign with the mission to make people eat more vegetables. This resulted in a long term, strategic concept where the hashtag #jegtarutfordringen (I accept the challenge) was built by using several different Influencers through all of 2018. Food blogger Linda Stuhaug was the core of the campaign. She challenged her own followers and other Influencers to follow her example. The other Influencers then challenged their followers and the concept had great organic reach and impact on the public in general. The concept is also a part of the client’s own channels. 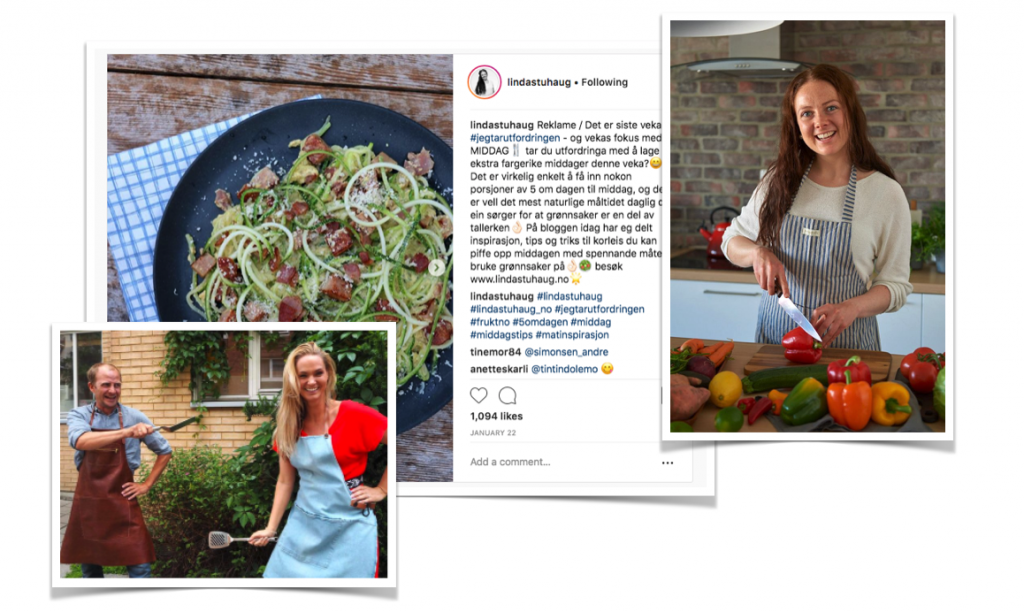 How to build the right Influencer Marketing strategy for your brand

At United Influencers, we help you find the right strategy based on your goals, as well as matching you up with the right Influencers, planning the campaigns, implementing them and finally analyzing the results in a full report. Get in touch with us today to map out your opportunities for 2019. 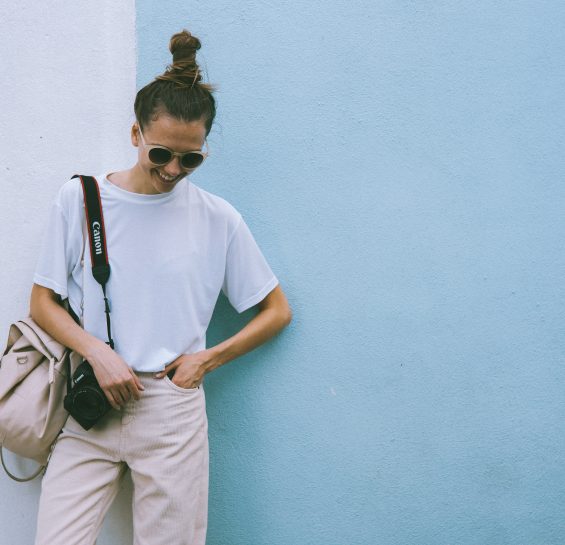 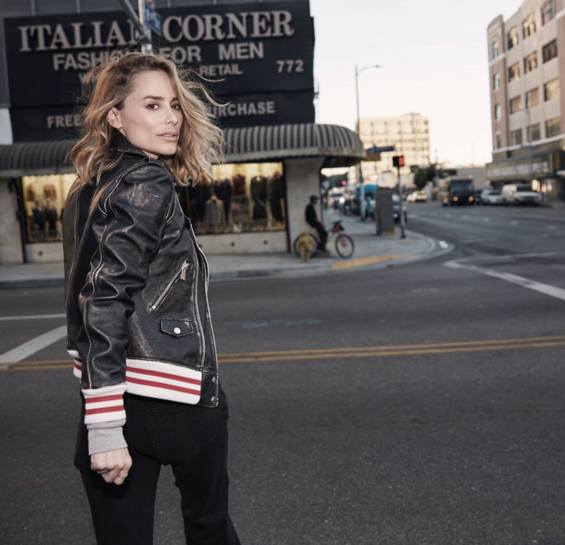 How does influencer marketing really work? 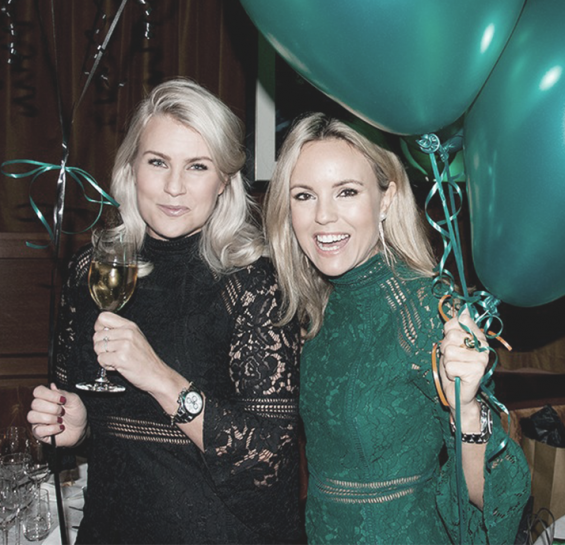 How to build an Influencer Marketing strategy for 2019

Read more
Top
This site uses cookies to give you the best experience. If you continue to use our service you agree with the use of such Cookies.OkNo